Lower Back Pain - Severe Condition or Just a Pain in my Back? 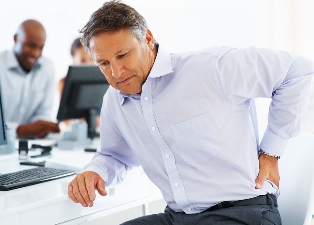 Self-management of low back pain: how many fail to do what's best for their condition

Low back pain: common problem that tends to return if not treated properly

Low back pain (LBP) is an extremely prevalent condition found throughout the world, with four out of five Australian adults experiencing it at some point in their life and similar figures found elsewhere. Defined as pain and discomfort beneath the bottom of the rib cage and above the lower crease of the buttocks, LBP can occur exclusively or along with other pain in the lower limbs. Though most cases of acute (rapid onset, brief duration) LBP don't develop into chronic (more severe) LBP, instances of it recurring are very common, with some data showing recurrences within a year of initial pain to occur in 66-84% of all cases and 76% of patients with LBP reporting an earlier episode. Many physicians believe that with proper management, recurrence rates can drop to as low as 25%. Guidelines for chronic LBP are not yet universally agreed upon, with many points of view across the globe conflicting one another. Treatment guidelines for acute LBP, on the other hand, are shared across the board. The relatively simple recommendations include remaining active, avoiding bed rest and using of simple analgesics like acetaminophen. Despite this universal dogma, however, many with LBP don't treat their condition properly, which leads to a high likelihood of recurrent LBP. An Australian study investigated just how many patients with LBP self-manage their condition correctly and established clear instructions on how to handle LBP.

The study sought men and women over the age of 18 who had reportedly suffered from upper or lower back pain in the last six months. Each participant was given a survey consisting of 29 questions related to background and back pain. After screening 1220 participants, 1001 met the inclusion criteria and were used as subjects, of which 570 (57%) had LBP only. Results from the survey showed 331 (58%) of these received advice on how to manage their back pain, regardless of whether it was first-time or recurrent LBP.

Most first-time subjects went to general practitioners (GPs) while recurrent cases went to specialists and chiropractors, but the most frequent advice from health-care professionals was exercise such as stretching, walking and swimming. GPs also recommended analgesics, rest and heat treatment. Even after being given these recommendations, only 106 (24.7%) of first-timers and 87 (17.8%) of recurrent subjects actually followed instructions and began exercising, with the majority of both groups either staying at the same level of daily activity or becoming less active. Overall, 449 LBP only subjects (79%) reported taking an analgesic of some sort regardless of being instructed to do so by a physician or not. Acetaminophen was the most commonly used analgesic, followed by ibuprofen and combination products, while non-steroidal anti-inflammatory drugs (NSAIDs) and opioids were used for moderate to severe pain.

One of the more notable figures was that subjects with recurrent LBP were much more likely to seek professional advice than those with initial pain (55% vs. 39%), which may in turn cause the latter to develop recurrent LBP down the line. Patients need to acknowledge that not seeking medical advice can make matters worse and should seek help early on. Exercise was the most commonly prescribed advice from physicians and research proves it to be effective for chronic LBP, yet many with recurrent LBP didn't follow that instruction. It appears that two important facts that can be drawn from this study are that patients and physicians need to both be aware of appropriate exercise guidelines for LBP, which includes aerobic activity, muscle strengthening and stretching. Secondly, there is a need for patients to carry out what's recommended to them. A significant amount of subjects (68%) were overweight or obese, yet only 8% of patients were told to lose weight by physicians.

In regards to analgesics, patients had no problem taking medication whether they were told to do so or not, and data proves acetaminophen to be the best form of pain relief. Acetaminophen is recommended until it's no longer sufficient in relieving pain, in which case NSAIDs should be considered. Dosage is another important issue, as the majority of patients reported not taking the proper doses of acetaminophen or not taking it regularly enough. On the whole, medical professionals need to educate patients on the best exercise programs based off of evidence-based guidelines and proper doses for analgesics, and patients need to be receptive to that education and follow the instructions given to them.